Written by Gabriela Henriquez Stoikow  on June 22, 2021 Advertisement Bahrain may seek a memorandum of understanding with PortMiami to promote trade opportunities and share best customer practices, the kingdom’s ambassador to the United States said here Monday. When asked about the possibility of opening a consulate in Miami, Ambassador […] 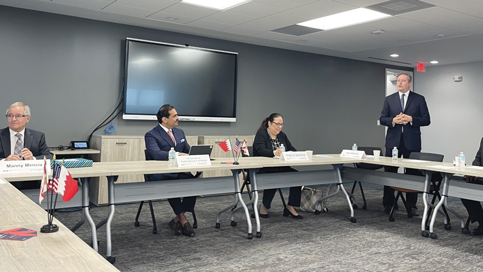 Bahrain may seek a memorandum of understanding with PortMiami to promote trade opportunities and share best customer practices, the kingdom’s ambassador to the United States said here Monday.

When asked about the possibility of opening a consulate in Miami, Ambassador Shaikh Abdullah R. Al Khalifa said that might be an opportunity to consider in the future.

Ambassador Al Khalifa met with business leaders of South Florida at the World Trade Center Miami as part of the effort of the Middle Eastern country to improve relationships with the US. Those who attended included representatives from Enterprise Florida, the South Florida Export Council, the Latin Chamber of Commerce, the International Trade Consortium, the Beacon Council, and Miami-Dade County’s Economic Development & International Trade team.

Bahrain, on the southwestern coast of the Persian Gulf, is one of the friendliest nations to the US and is considered the 76th largest US goods trading partner by the Office of the US Trade Representative. A 2006 Free Trade Agreement strengthened those business ties.

Aiming to encourage US business investments, the ambassador said at the meeting that Bahrain is “a moderate-open cosmopolitan and a very tolerant country” that has no corporate, personal or withholding taxes for US investors.

Bahrain is now home to over 200 US companies, 18 branches registered with the Ministry of Commerce and 700 companies with 100% American partnerships, he said. The Free Trade Agreement “has really been a game-changer” for Bahrain, the ambassador said, and now the nation is looking to expand benefits for US companies interested in opening there.

The nation sees as a next step the creation of a US free-trade zone close to the ports of Bahrain. Dates of opening and the exact location are still unknown, he said, as the idea is still in early stages of development. The project, he said, is a result of the Free Trade Agreement and a Memorandum of Understanding with the US government.

“We will be talking to the current administration for ways to achieve it. There are a couple of ideas that might be worth considering… And that’s one of the projects the companies should keep in mind,” said Mr. Al Khalifa. The country is sourcing the requirements that will help achieve the plan to give US companies an edge in trade.

Mr. Al Khalifa said he has a personal interest in developing arts and culture initiatives among both countries and opening direct flights between both nations.