There’s been a growth in “maker” businesses in Wadena in the last couple years, and that has brought about an opportunity to collaborate in ways perhaps none of them could have imagined. These businesses of roasted coffee beans, fine pastries, bubbling brews and distilled spirits, all within downtown Wadena, are […]

There’s been a growth in “maker” businesses in Wadena in the last couple years, and that has brought about an opportunity to collaborate in ways perhaps none of them could have imagined.

These businesses of roasted coffee beans, fine pastries, bubbling brews and distilled spirits, all within downtown Wadena, are finding that in working with one another rather than against, they are building up their brand awareness and strengthening others in the often tasty process.

Take for instance Owly Bean Roasters, at 312 Jefferson Street South. Owner/operator Kyle Hagen started the coffee bean business with a plan to supply his own beans to his own coffee shop and then gradually get his product into other coffee shops.

“That’s how I sort of imagined it,” Hagen said.

It did sort of start that way, but he also began making some specialty coffees for small non-coffee businesses that wanted to sell their own blends in their stores. That took off through word-of-mouth to the point where Hagen now stays busy making signature blends for others. Shoppers can go to Glamour Salon in Wadena and get their unique blend of brew, for example, or go to Little Round Still and get a bag of beans roasted after soaking in the distilleries’ own bourbon.

Owly Bean Roasters has a plethora of blends they make for specific businesses to sell.
Michael Johnson/Pioneer Journal

Hagen is able to promote Little Round Still as the only place to buy that specific blend of bourbon coffee. In turn, Little round Still promotes Owly Bean Roasters by selling drinks mixed with their coffee. Next, Hagen will create his own blend of coffee using the bourbon to sell in his own business.

It was a match-up that neither could have dreamed of when the two businesses opened — Little Round Still in November 2020 and Owly Bean Roasters in December 2019.

“Our coffee has been very popular,” Little Round Still general manager James Muston said. “It’s kind of a fun thing to partner up with somebody else and make something you wouldn’t have been able to on your own.”

It’s a real thing in Wadena. The distillery is also working with BBQ Smokehouse in Wadena to provide bourbon-soaked wood chips for smoking their meats. Likewise, customers can find meat sticks from the smokehouse at the distillery.

The possibilities are nearly endless

Hagen listed off a dozen other collaborations he’s been involved in, including making blends for local credit unions and insurance agencies. He’s made a series of “We The People” roasts, from which a portion of the proceeds go to emergency services or emergent needs in the community. In every case, the roast label promotes Hagen’s product as well as the business or organization he’s teamed up with.

Another example is when Hagen partnered with Drastic Measures Brewing to create a coffee-infused beer called “Night Moves.” It’s an English Brown Porter made with Owly Blend coffee and vanilla beans. Yes, beer with hints of coffee flavor is a thing, and apparently it’s a popular drink choice throughout the state. Both business owners, who take advantage of social media, were able to promote each other through this new product.

“It’s actually one of the highest-rated porters in the state,” Drastic Measures Owner/Operator Brett Doebbeling said of the collaboration.

Drastic Measures took part in another fun collaboration when it made Sho’Nuff, an imperial stout aged in Willett bourbon barrels for 14 months and conditioned on macaroons from Oma’s Bakery and Restaurant.

Sho’ Nuff was a collaboration with Drastic Measures Brewing and Oma’s Bread. The stout imperial drink was aged 14 months in bourbon barrels and seasoned with macaroons from Oma’s.
Courtesy photo

Doebbeling goes beyond working locally by also working with other breweries in the state to create unique drinks under a dual label. In the process, the breweries work together in the same rooms learning from one another. It goes beyond making a buck, but actually making each other better at their craft.

“We are in competition fighting for shelf space, but not so much,” Doebbeling said. “It’s more of this camaraderie.”

He said the more “destination locations” there are in town, like Little Round Still, the more people are making a point to visit Wadena and shop around. In a time of a pandemic, when restaurants and bars were shut down for months, it’s a time to make good out of the bad.

“Everybody is trying to make it. Everybody needs some help,” Hagen said. “Working with someone else, their eyes are now on my stuff, and I put eyes on their stuff. It just builds the town in general.”

Hagen said there has been an influx of new businesses, and businesses that want to make the town better and stronger. These collaborations get away from the “me” and focus more on “us.” That’s a movement that he believes will continue to help move Wadena forward.

Fri Mar 19 , 2021
TAIPEI — Vietnam’s largest conglomerate Vingroup said on Friday its car unit was in early stage talks with Taiwan’s Foxconn about working together and that any partnership formed would focus on developing batteries and electric car parts. Foxconn has proposed acquiring EV production lines owned by the unit VinFast, two […] 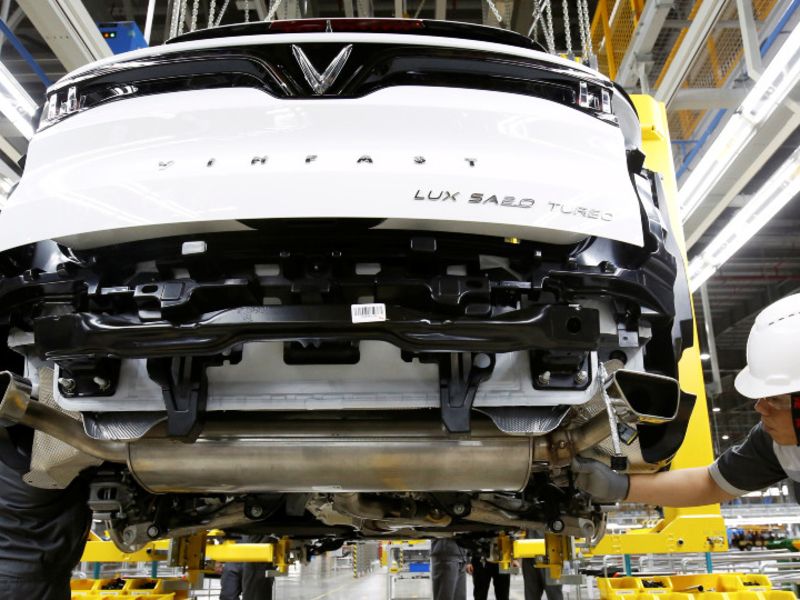