FAYETTEVILLE — A split doubleheader between No. 1 Arkansas and No. 11 South Carolina on Friday ahead of rough weather Saturday created a weird weekend off and a few days of reflection for the Razorbacks. The Hogs’ pitching staff threw a pair of two-hitters to defeat the Gamecocks 6-1 on […]

FAYETTEVILLE — A split doubleheader between No. 1 Arkansas and No. 11 South Carolina on Friday ahead of rough weather Saturday created a weird weekend off and a few days of reflection for the Razorbacks.

The Hogs’ pitching staff threw a pair of two-hitters to defeat the Gamecocks 6-1 on Thursday and 5-1 in the nightcap of Friday’s doubleheader to give Coach Dave Van Horn’s club its 12th consecutive series. It also was the team’s fourth road series victory over a current top-15 opponent this season.

The Hogs are a combined 7-2 in road games at then-No. 4 Mississippi State, then-No. 3 Ole Miss and South Carolina in conference play, and also won a series at current No. 15 Louisiana Tech.

The University of Arkansas (32-7, 13-5 SEC) will have the full weekend to relax, rejuvenate and watch the rest of the league after arriving back to Northwest Arkansas in the early hours of Saturday morning.

“Well, it’s really hard to do,” he said. “You usually stub your toe, even if you’re a really good team and you’ve got great pitching.

“We have good pitching, we have a good bullpen, we have a pretty solid lineup that’ll fight you, but to win every series, it’s an accomplishment for sure. We don’t talk about it too much. We talked after today’s first game and just said, ‘Hey, if we want to win this series, this is a big game right here. We need to out-tough them.’ ”

The Razorbacks are sitting pretty heading into their final four conference weekends, in order: at LSU, home vs. Georgia, at Tennessee and home vs. Florida.

South Carolina came away duly impressed with the Razorbacks after suffering its first home series loss of the year.

“They’re elite in most categories,” South Carolina Coach Mark Kingston said. “That’s why they’re regarded as one of the top teams in the country. You’ve got to tip your cap to them. We had a chance to win the series … and fell short.”

Gamecocks leadoff hitter Brady Allen’s home run in the third inning of Friday’s nightcap off Patrick Wicklander was his team’s final hit of the game.

“I think it’s kind of an eye opener when you look at a team like Arkansas,” Allen said. “They don’t make mistakes. They make you pay if you leave a fastball over the middle of the plate.

“We saw that a couple of times. They really make you beat them. They don’t make mistakes and beat themselves. That’s what makes them the No. 1 team in the nation.”

Arkansas is very likely to remain No. 1 in most or all of the polls again next week, and its RPI could climb one spot to No. 1 after another road series win. The only team ahead of the Razorbacks in the RPI rankings is Fairfield, which took a 24-0 record into Saturday’s doubleheader at Manhattan. The Stags opened their Metro Atlantic Athletic Conference-only schedule with 20 consecutive home games before venturing out of Fairfield, Conn., last week.

The Razorbacks went into the weekend with an 8-1 record against other teams ranked in the top 10 of the USA Today coaches poll Top 25, and a 12-3 mark against teams in the top 15.

The Hogs have persevered through issues that could have sidetracked other teams, starting with doubleheaders on each of the past three weekends. The Razorbacks split twin bills at Ole Miss and South Carolina, and swept one at home against Texas A&M.

Because a Friday rainout in the Texas A&M series forced a Saturday doubleheader, it threw off the Razorbacks’ normal weekend pitching rotation. The top starter Wicklander (2-1, 2.20 ERA) pitched on five days’ rest in Friday’s nightcap at South Carolina, and right-hander Peyton Pallette (1-2, 3.98) did the same in Friday’s opener.

Kopps retired all 15 batters he faced against South Carolina and struck out 12, including all 6 in his game-ending stint Friday night.

“I commented to our pitching staff right after the game that we won two out of three because they gave us the opportunity to do that,” Van Horn said. “They came here with a little bit of an edge, and they did a nice job.”

Van Horn and hitting coach Nate Thompson still are experimenting with slots in the batting order, such as moving Zack Gregory to leadoff over the weekend and slotting Robert Moore in the six-hole, where he was the hitting star with two home runs Thursday.

“I just think they like to play,” Van Horn said. “They like to win. They fight to win, even when it’s not pretty sometimes. They don’t care where I put them in the batting order.

“The pitchers, I think they felt like they had something to prove because … maybe they don’t feel like they’re getting the respect they’ve earned so far this year. They came down here and they pitched really well.”

Arkansas tried to reschedule a home game for Tuesday after Missouri State canceled a scheduled game due to covid-19 issues within its program, but as of Saturday afternoon the Razorbacks could not land an opponent.

That means the Hogs likely will go two consecutive weeks without a midweek game heading into Friday’s series opener at longtime nemesis LSU.

Van Horn said a better-rested pitching staff, with Wicklander likely back in the Friday role and a healthy Connor Noland ready to resume his season, will be welcome heading into south Louisiana.

“We’re going to need it against LSU, because they can swing the bats, and they’re tough at home,” he said.

But that’s for next weekend. This weekend wound up surprisingly free.

“I’m going to mow some,” Van Horn said. “As for the guys, I imagine they’re going to enjoy every minute of this. Hopefully they’ll get some rest.

“I’m sure some guys will want to hit [today] because that’s what our hitters want to do. There will be some optional times there. We’ll open some things up for them. We won’t do anything until Monday officially.”

Sun Apr 25 , 2021
Close to a dozen different artists displayed their work in shops throughout the neighborhood WASHINGTON — No part of D.C. was immune to the financial devastation of COVID-19, but a new outdoor art exhibit aims to ease some of the burdens on Adams Morgan businesses. AdMo Art Walk features the […] 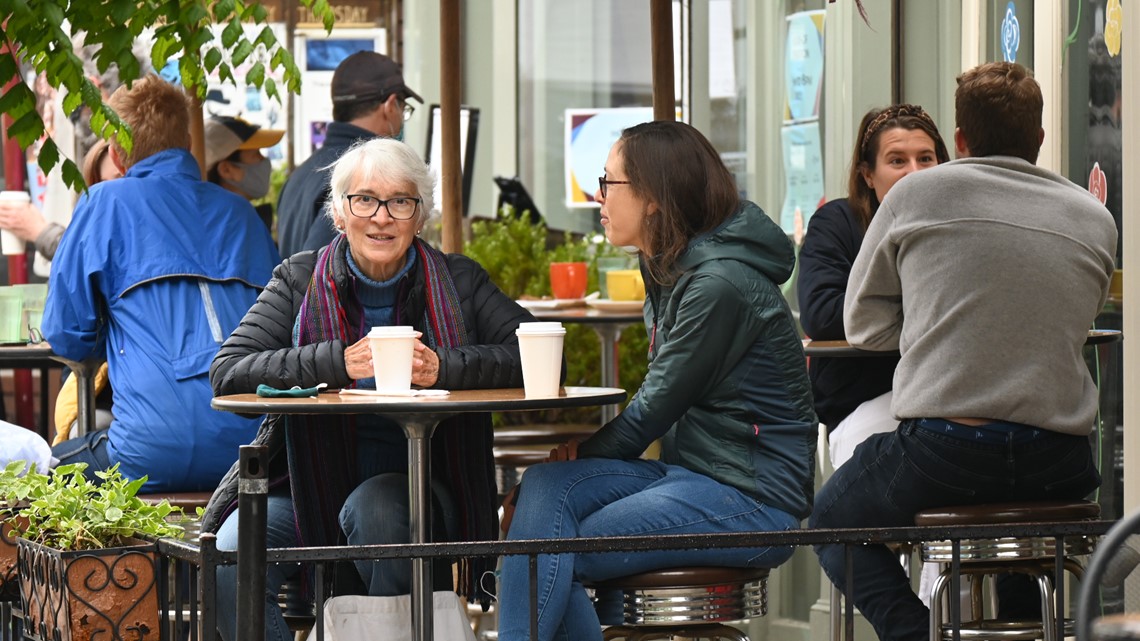