West Sonoma County Union High School District Chief Business Official Jeff Ogston has resigned from his post, effective April 14. “Jeff informed the superintendent and me about a month ago that he was pursuing an opportunity outside of education and that opportunity is one in which he needs to act […]

“Jeff informed the superintendent and me about a month ago that he was pursuing an opportunity outside of education and that opportunity is one in which he needs to act upon now, so as of today, this is Jeff’s last day in the district,” Director of Human Resources Mia Del Prete said during the WSCUHSD’s board meeting on April 14.

Attending in his place was Anne Barron, the interim chief business official before Ogston was hired and who Beal said on April 19 would serve in that role until the district finds Ogston’s replacement.

Ogston said he would still stick around to support the district through the transition in an April 16 interview, but that he looks forward to new work as a personal financial planner, starting the beginning of May.

As a certified financial planner, it became clearer to him that he wanted to take his career further in that direction and within weeks, an opening with a start date materialized, “and to be quite honest, the job kind of started to take its toll, mentally and physically,” Ogston said.

In order, he said the biggest factors in his decision was the job opportunity that appeared followed by the pressure to do well and do right by everyone in his role, extending his hours to 60 to 80-hour weeks.

He said, “I took a lot of stuff on personally, and wanting to be able to make things better, and I didn’t feel like I was. So, it weighed on me and then really at the end of the day, it was about choosing a path that would kind of relieve me from that, help me be better around the house, around the home and with the family and whatnot because, like I said, it was kind of taking a mental and emotional toll on me.”

The former chief business official said he wasn’t pulling his hair out, but that “probably a distant third” reason to depart was the added pressure of the contention surrounding the district as it waded deeper into consolidation plans to merge Analy High School and El Molino High School this fall.

“We’re not having a popular conversation right now and I totally understand that. So, I think that became a challenge for me as well, which was just really, really wanting to provide the best information I could,” Ogston said.

Sonoma West Times & News reported in March 2020 that Ogston, who holds degrees in both economics and finance, stepped out of his position as an Analy math and finance teacher into his appointment as the chief business official.

“And I really wanted to try to bridge the gap,” he said, among the other teachers coming off the strike, “and so I was hoping to be able to help to provide some clarity to the budget itself.” Then the pandemic hit.

By that spring, Ogston said, the district was looking into the long run of potential consolidation due to financial and declining enrollment issues. “Even the year before, we knew we had I think like a million dollars in reductions that we had to make. So, the deficit spending part has been a continual issue going back many years,” he said.

The district’s budget looked much worse in light of Gov. Gavin Newsom’s revised budget proposal in May 2020 factoring in the COVID-19 economic impacts, he said.

The district’s projected $2 million shortfall by the 2022-23 year and the state’s funding deferrals accelerated the consideration, although the deficit calculations now point closer to $1 million, Ogston said. “But that was nothing that was found in the budget, that was just more the expectation at the state level changed during the course of the year,” he said.

According to Superintendent Toni Beal on April 20, the district intended to hold a feasibility study presentation for the board and the public in April 2020 to discuss the possibility of consolidation in person, but stay-at-home orders occurred and ultimately the district held the presentation that fall, virtually.

Ogston said getting caught up on the district’s finances will likely be the biggest challenge for whoever takes up the responsibilities of chief business official next, but that he and Barron will be there to ensure the information is accurate.

Once his replacement is brought up to speed, Ogston said that while he does not think the issue is necessarily unique to WSCUHSD, “competing interests” are at play in the district. “And I say that not in a bad way, right, but there’s just a lot of things that need to get done, financially speaking,” he said.

The district is losing more money than it’s making, ultimately leading to a consolidation scenario, and its expenses are expected to climb higher and higher while employees bear the brunt, he said. Across Sonoma County, enrollment declines as fires and the cost of living push people out of the area, and “when you’re online, you can learn from anywhere,” Ogston said.

“But that’s one of the big challenges, especially based on how we’re funded at the state level. The amount of money that a school district gets is directly tied to how many students are in a school district and how often do they come to school? That’s really the driving force,” he said.

The timing of things

Some community members found his departure suspicious during a time when the district’s budget is under great scrutiny and the district prepares to consolidate Analy and El Molino.

“It sounds super, super unprofessional when we’re moving forward with this consolidation and the stimulus monies are coming in and the public is questioning some of his budgeting,” said Gillian Hayes, a lead organizer against consolidation, unfurling a recall campaign and potential legal action.

“It’s very, very curious to me. So, in that sense, I think it’s actually a great time to bring a consultant, like a third-party auditor in to kind of look at all the books and just redo everything for us and really see if a consolidation is a necessary movement forward,” she said.

A number of community members have said that incoming state and federal COVID-19 relief funds can be used to maintain separate campuses in the fall. According to Ogston in an April 13 email, the district has already received and spent CARES Act funding passed in 2020 this year, with a spending deadline of May 31, 2021.

The remaining incoming funds from AB86, the Coronavirus Response and Relief Supplemental Appropriations Act and the American Rescue Plan are restricted and intended to address COVID-19 impacts and learning loss incurred during the pandemic, Ogston said in his email, adding that though the federal funding could be considered more flexible, it retains the same intent and allows districts to create a multi-year student support plan.

In an interview on April 7, Beal said the district is actually penalized for the amount of assigned AB86 funds spent on purposes not covered in the allowable uses, subtracted from the district’s Local Control Funding Formula (LCFF) allocation in the following year.

Jessalee Mills said, “I think it’s pretty suspicious. If somebody thought this was a great idea and you guys were following the appropriate budgetary constraints and the budget wasn’t that accurate, why would you resign through all of this? Why wouldn’t you sit here and see it through so you could put that through your resume?

Another El Molino advocate, Terra Del Drago said she agreed with Hayes and that Ogston had never explained the budget line items and where money is going to her and others when she called him out for the information for months. She said there is money available to keep the schools separate and that a lack of transparency was a major issue.

On April 20, Ogston told Sonoma West Times & News he does not recall receiving a request directly from Del Drago. “I did provide line item info to other community members who have requested it during the course of the year, as well as going over it with the Superintendent’s Budget Committee,” he said, adding he has answered “many questions along the way from other community members.”

Next, Leah Woody, who works in the College & Career Center for Laguna and El Molino thanked Ogston for his efforts and wished him luck. “It’s unfortunate though that he’s leaving at this time, because I do want to bring it to the board’s attention and just make sure that we take care of the people that we have on staff before we hire others,” said Woody, an issue she said is significant in the counseling department working in mental health.

“I don’t know how the rest of the board or staff feels, but I have spent countless hours with Jeff going over everything, and to my knowledge, there have been a lot of people,” Trustee Angie Lewis said. “To my knowledge he’s been super explanatory to anyone that needed it about all of the line items, so I just felt it needed to be known that he was super helpful.”

In an April 16 interview, Ogston said he did not have a direct response to those who are displeased with the timing of his resignation, but that at the end of the day he can do what he feels is best for himself and his family.

“Really, the opportunity that was presented to me was one that I needed to make a decision on and I felt that it was a decision that was best for me,” he said. As for April 14 in particular, Ogston said he had previously planned the first vacation he would take in almost two years when the start date of his new position was confirmed for early May, so he did not want to be paid for his time off when he would be transitioning immediately after.

Has App Made Trading Too Irresistible?

Wed Apr 21 , 2021
LISTEN: Robinhood Stock Trading: Has App Made Trading Too Irresistible? ✕ ■ April 21, 2021, 12:01 AM Is the app that brought zero-commission trades and a mobile-first design to millions of investors too good at what it does? By Misyrlena Egkolfopoulou, Annie Massa, and Anders Melin Illustrations: Peter Gamlen for […] 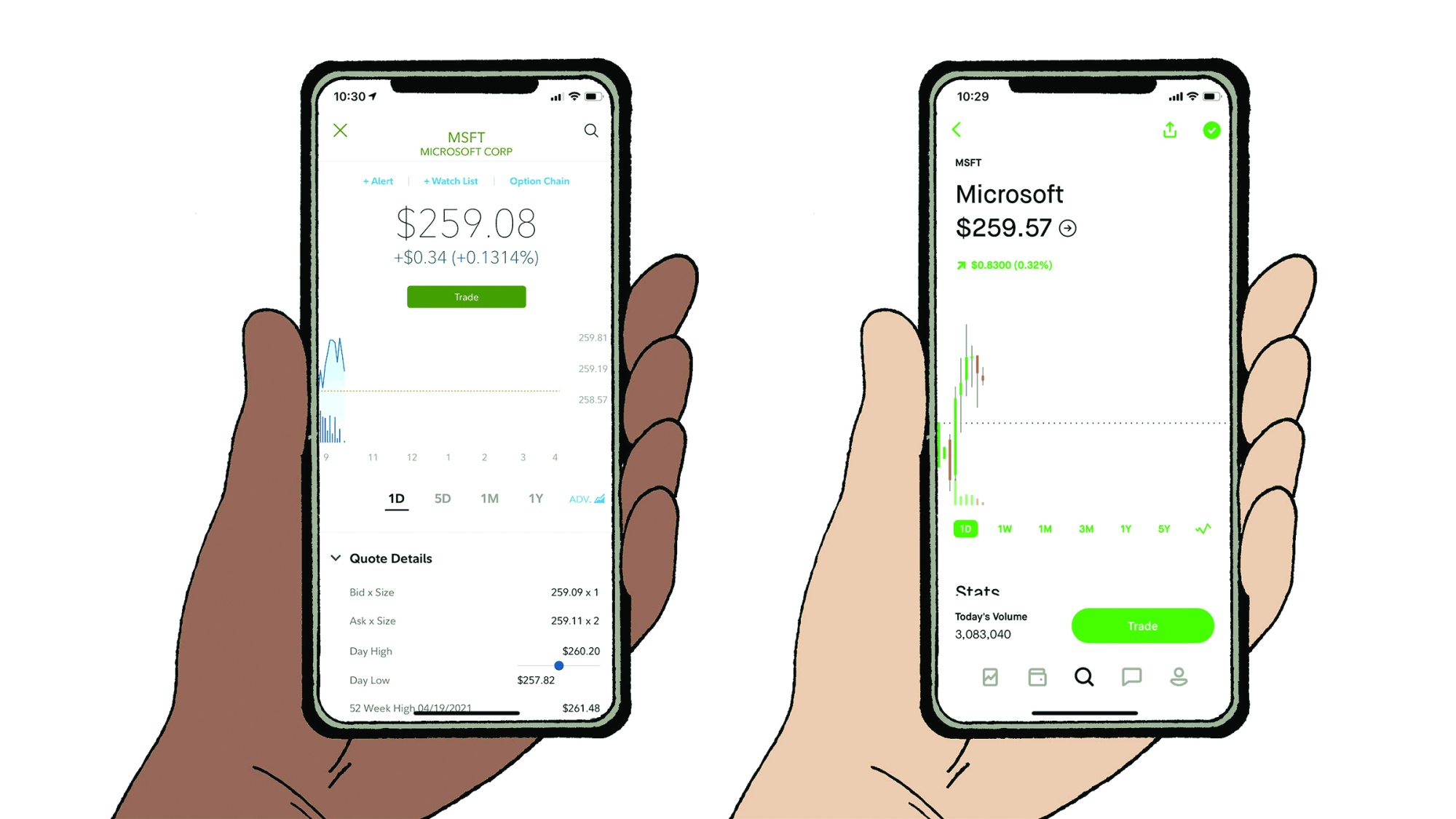